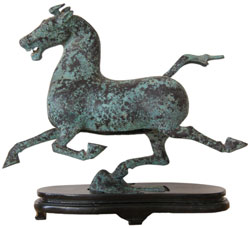 This is a wood year of the Horse, who is a fire animal. This gives wood over fire so things will really burn. This is a year of speed, excellence and achievement.
This fire will also give confrontation and revolution, but not actual war.
The way through this is to use the fire of creativity to find new solutions and to initiate radical change.
Horses are not sticklers for etiquette but creative nonconformist, they do not hold resentment because happiness, fairness and beauty are more important than any form.
The real hope of this year is that any old forms that no longer serve our needs will be exploded, and the creativity is there to institute alternatives and find solutions. The challenge is that people will be confrontational about needing change. So the trouble spots around the world will flare, but the horse thrives in this situation and can negotiate and see solutions. The horse is not frightened of aggression and can think on his feet. The horse is humanitarian and loves life.

The horse child is a quick learner, and fearless in there adventuring, they like to be with others and need a companion to interact with. They may look like they need discipline, but that only breaks their spirit and is not possible. The wood horse child will discipline themselves when they need to because they are observant and can see the consequences of their actions faster than most. They need the opportunities to learn – adventure and travel are the life blood of a horse.

How different people fare in the year of the Wood Horse

Unless you were born in 1954 or 1966, you will need to try hard to stay grounded and practical; not getting carried away in creative ecstasy. This is a year when your creativity and ability to find new solutions and ways of seeing things will be appreciated. You can bring people together and initiate new solutions to humanities problems.
Keep properly hydrated and fed, not to many carb’s or fat.

The Sheep is yin to the horses yang, they are friends and the energy of this year will carry you forward without carrying you away. This can clear up of its own, many problems that may have been of you own making and have dogged you for some time. This is the year they should drop way. But, do not try to do it yourself through schemes just let them drop naturally.
Do not over eat, but be social and gentle and you will come out stronger than you went in.

This is a year for the Monkey to back the right horse. It is not a year when you can play because you could be taken seriously and people think you are on the ‘wrong’ side. Don’t take risks but gently go about your life looking for good things to do with others, hang out with people you trust, not the crowd. You don’t want to get caught in a riot.
You need to stand back to see the good thing to back and then go for it – it could change your life.
Health wise do not over stretch your self – gently tai chi would be good.

This is a year when you need to learn to negotiate and help others negotiate to get the best results for all, you will have to compromise and so will they if you play it right. If you don’t give a little it could be taken from you. On the other had you can use this energy for creative investment on a personal or material level. Guard you health with qi gong, meditation, group singing and other things of beauty done with others.

This is a fun year when Dogs can run and play, run and work or travel. They have the energy and the companionship to be with people in a creative way. They will need to think creatively to keep up, but that is great. This should be a time of creative work not drudgery. Life is to be enjoyed. Look after you health by eating moderately and resting when you need it.

This is a work year for Pigs, but one where you can really get your life how you want it. Not everything will go right and it may seem that you are stretched thin at times. Don’t worry, lots will go right and as the year goes on you will get more energy and even have some left over for socializing.
Look after yourself by having private meditation time to take stock and balance.

This year is not the easiest for Rats. Rats will be frustrated easily and need to watch their spending. Personal relationships will be less satisfying and life will feel more competitive.
Their health can suffer because of the pace of change and the unpredictably will leave them confused. The should rest and conserve and let others make the decisions this year.
In a wood year Rats can help themselves by eating cleansing green vegetables and not allowing themselves to get to cold by being out to late at night. The social life is not necessarily for you this year. Be regular in your habits.

Oxen are hard workers so they will get through this year. Injury from trying to hard can let them be late and not honour their commitments. Do not worry this is a Horse year and resentment will not be held for long. Disarm criticism by agreeing then suggest a revised schedule.
Avoid straining yourself by trying to keep up with your commitments, they are unreasonable so slow down, hold your space and remember that you are an Ox not a hare.
Eating slow release carbohydrates can help you get the energy you need, so remember your porridge, and to carry cereal bars if you are likely to be working hard. Eat drink and rest as a way of regrouping.

This is the kind of year that Tigers enjoy, fast, exciting, social and creative. The danger is in overheating. Remember that your tiger nature is that you eat rich food, but not too much; that you take time for a swim and a laze, so as not to over heat; and that the cool of the evening is your most creative time. If you can do this you will get to the end of the year in good shape.
The other health tip is to do good stretching exercises to stop the build up of tension in your tendons and body.

In a wood year the Rabbit gets an inner strength and security that can often be lacking. They will feel that they are slow this year which is quite a change. This is okay because friends and family will be the best supportive environment.
If you travel you will find that the whole world is family. Let your caring nature come out and it will be rewarded with recognition, rather
than being exploited this year.
If you start to get strung out or struggle remember to check you are not getting short of food, carry slow release carb’s with you.

Dragons are of the earth so in a wood year if they are not strong and clear they can be beset by worried and doubts. Your best job this year is as a communicator. Use your charisma and luck to negotiate and bring people together. Do not be frightened by aggression, easy to say hard to do, but it is not personal – it’s just a volatile and expressive year. So see beyond the fireworks and earth the creative energy.
Health wise, eat simple nourishing food with lots of greens and little sweat and you will really benefit.

Snakes will like this year as things get done. But be careful as the truth will out this year, so your conduct and motives must be exemplary. Along with this; try not to be critical or spread rumours about others as this is a year of creativity, so you would be seen as spreading negativity and not respected. See this as a year of positive opportunity.
Guard you health by having fluids with salts to make sure you keep properly hydrated.

I hope you have a creative and health filled year.
Disclaimer: I hope you find this booklet informative but it is not a substitute for individual professional advice or treatment either medical nor legal and it carries no guarantees.
We must all find our own truths and what works for us.